Thank you, Trent, for the feedback on this piece… and now, with our local spotlight, here’s a little boy we found on the street…

International News Perspective: “This just in, a bomb has gone off in a busy market in some place we’ve never heard of.  We do know that fourteen people lost their lives and nine others were injured.  We’ll keep you updated on the terrible developments but now, with Sports, here’s Guy Cool.”  “Thank you, Dandy.  Today Billionaires A sold the rights of Millionaire B to the Billionaire C Conglomerate, and the only reason any of this is news is because we are paid to entertain you.  So, thanks for making our job easy.”

Local News Perspective: “The clean-up efforts continue in the aftermath of the Downtown Square bombing that occurred last week.  Crews have already begun razing the buildings deemed unsafe and new plans are well underway to erect a monument to the lives that were lost.  Authorities are still trying to determine which of the seven terrorist groups claiming responsibility are actually culpable for this mass tragedy, though one officer who requested anonymity told us it was likely an isolated attack by someone disenchanted by the struggles of their life.  When pressed for clarification, the officer shrugged and said, ‘People can’t just commit suicide in their rooms anymore, they’ve got to make a spectacle of it.’  Terrorist attack or suicide…?  We may never know the truth.  Eye-witness videos continue to pour in from the abundance of people who happened to be filming in the square at the time, and those clips are all posted on our website.  None of them have been edited, so be warned they can be quite graphic.  And now, with Weather, here’s Blown Hair.”  “Thank you, Beauty.  Today there was weather and tomorrow we are expected to be treated with more of the same, but you would know that if you ever looked up from your screens to peer outside and, I don’t know, maybe go for a walk or something.”

Impacted Family Perspective: The officer who has been assigned to us is very polite but he doesn’t know very much at all, and he probably never will.  The people in the hospital are patient with our questions but they are tired and overworked and I can tell they wish we would go home so they could do their jobs without us hovering nearby.  We’ve been living here for a month now, sleeping in shifts and showering in the bathroom sinks.  We are all exhausted and want to go home too, but we can’t leave him.  Misha shows some signs of improving, but he may never walk again even if he is gifted a prosthetic limb at some point in the future.  The nerve damage in his back is too great, and the doctors don’t want to risk further damage by removing the shrapnel near his spine.  They used bigger words than that, of course, but that’s basically what they were saying.  Besides, he still wakes up screaming twice a night.  The horrors he witnessed are more of a scar than where they stitched up his lost limb.  We haven’t told Misha about Momma yet.  He isn’t strong enough.  I’m not sure Daddy and I are strong enough to keep this family from falling apart without her helping us along.  I miss her.  I had to leave Misha’s room yesterday before he asked why I was crying.  I miss her fiercely and I don’t understand why she was killed.  I don’t understand any of this…  The talking heads from the local stations have been sniffing around for an interview but I refuse to turn my mother’s death into a sound bite for them.  Not that you care, because this is a blog post, and I lost your attention 100 words ago.   So, go then, seek your entertainment elsewhere.

You can go ahead and come down from your soap box.

Do you need to agree with an artist’s lifestyle or politics to appreciate their art? To spend money on it?

Does this seem like a couple of simple “yes” or “no” questions to anyone else?  Alas, I digress…

I tend to tune out the talking heads when they get up on their soap boxes and start preaching to the masses and that includes my favorite artists too.  I don’t have to agree with you, with your politics, with your beliefs on religion, with your judgements and behaviors to still understand and appreciate that you are truly talented at what you do when you step down from your soap box and return to being an entertainer.  I have before and will continue to support artists I don’t agree with 100% of the time.

And, honestly, I can’t even tell you who all I’m referring to because for the most part I don’t pay attention to these people when they remove themselves from the environment I like them in.

I don’t even have a problem with you setting aside your talent for awhile to step on that soap box in the first place.  We are all allowed to voice our opinions, that’s one of those things that makes this place great.  Say what you will, people will hear you, and then they can decide on their own if they like what you had on offer or not.

However, if I paid money to buy a ticket to attend some sort of art thing – a concert for example – and the artist sets aside his entertainer role while on stage to preach at me about this or that it really irks me.  I didn’t pay to see you get on your soap box.  I didn’t drive however long to then wait in long lines full of the rowdy stinking masses to hear (0r see) anything other than who you are as an entertainer.  Get back to the music, or the show, or the art, or…

This has been a public service announcement from the matticus kingdom.  You may return to your regularly scheduled blogging.

Revis Edgewater nominated me for the: 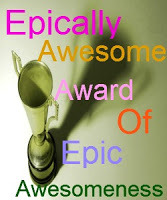 This one is just so much easier to show, rather than say… It’s a total tongue twisting teaser that tangles thoughts thoroughly, though that theoretically isn’t its intent.  Hmm, can an award have an intent?  The giver, yes, but the award itself?  Something to ponder later, perhaps.

Let’s bask in the epic awesomeness of this award shall we?

Yes, that’s quite nice.  I do so enjoy being considered epically awesome.

Hmm, you are right, there generally are rules associated with these types of things.  How good of you to notice.  And this is no exception, except (oh, there is an exception) this time there’s only one!  (One rule, and one exception.  Coincidence?)

And my nominations for the Epically Awesome Award of Epic Awesomeness are:

All of these bloggers are truly awesomesuace in their own way.  The Kingdom strongly encourages you to go forth and see what they have to offer in the way of entertainment, challenges, delights, and mysteries.  And make sure you show Revis some love too… he knows people… it’s best to stay on his good side…  That’s really all I can say.

Do large groups of people, full of commotion, camaraderie, and a cacophony of sound (I love alliteration), energize me or do they send me reeling away in search of a quiet corner?

When I’m in the mood, I can feed off the energy of a crowd, it can get me going, pump me up and keep me up, moving, interacting, dancing, all through the night and past the wee hours of the morning.  I’m a dj.  I know how to feed of the energy of a crowd.  I know how to take that energy and spin it right back out so that others can feed off my energy.  Let’s get this parted started!  Let’s keep it moving!

However, I’m not the 18 year old kid I was when I first stepped behind the decks and started spinning those black circles round and round.  There are definitely days when I’m just worn out to the core already and having that wall of sound all around me, having those people with their questions and their movement and their need for attention, is just more than I can handle.  The sound is like lightning, in a bad way, flashing across my brain.  (Yes, I meant lightning there, not thunder.  Sheesh!  Who is telling this story?  May I continue?  Okay, here we go…)

So, sometimes I love the crowd and sometimes I hide from the crowd.  In general, I’d say that’s probably pretty normal.  Hmm, but since I’m the jester I shouldn’t do “normal” right?  So, never mind, scrap the rest of the post, and here’s the answer:

Are you not entertained?

I guess you have been entertained…

The Matticus Kingdom has been nominated for a couple more awards.  Once again, as court jester and chief scribe (among other things) the responsibility falls on me to graciously accept these nominations and carry out the instructions that come with them.

For clarification purposes, that’s MischievousEyez of My thoughts, My life, TwinDaddy of Stuphblog, and April of Ponderingspawned fame and fortune.

(Did you see what I did there – In two sentences I managed two pingbacks for each of my award bestower type people.  They teach you those sorts of tricks in jester school.)

1. Display the award logo on your blog.
2. Thank and Link back to the person who nominated you.
3. State 7 things about yourself.
4. Nominate 15 bloggers for this award.
5. Notify those bloggers of the nomination by linking to one of their specific posts so that they get notified by ping back.

7 things about me:
1) My name is Matticus, you would like my father, prepare to be amazed.
2) I have survived the 3 dangers of the Southern California living: Death Valley, Santa Ana Winds, and the California Desert Tortoise (their beaks are really sharp!).
3) I have 5 fingers on both my left and right hands.
4) I think masks are terribly itchy.
5) I don’t think I will ever grow tired of quoting Princess Bride.
6) I’ve spent the past few years building up a tolerance for spicy Thai food.
7) I always have fun storming , the beach volleyball court.

Rules of the Shine On Award:

“This award is for the blogs that shine, make you feel good and are inspiring to the reader.”

Questions from twindaddy and my answers: