Below I’m posting a bit from a song I love and then I’ll write something around it (not necessarily in the context from the original source but maybe).  If the line grabs you, please steal it and play along too.  Post a link in the comments so I can check out what you did with it as well.

The sun set gray behind the ash rising on the horizon.  The fires had been burning in the west for longer than he could remember.  Some he met worried they would spread east but it had been years and he’d never seen a flame.

He watched the darkness spread towards the west and eventually overtake the gray.  There would be no stars.  The nightly winds brought clouds with them that sat low upon the ground.

As the stillness of the evening settled into his mind he threw his bedroll on the ground and prepared for sleep.  As always, his thoughts drifted to the friends, the brothers, he had left behind.  Some had gone to battle the raging fires.  Others had stopped traveling to try and build something, a life, a home, a family, here and there along the way.  He alone had kept on.

He missed them but he did not regret his choices.  His path was hard but so was theirs.  Life can kick and gnaw and grind a person down even when everything seems to be going their way.  He could not fight who he was.  They couldn’t fight who they were.  Trying to do so would have been folly.

A chilling breeze pushed down from the clouds and he curled further into his blankets.  It would rain later, he knew.  The ground would be colder and harder in the morning and yet he would wake and carry on.  That was what he knew how to do best.

Turning towards sleep, he yawned and murmured, his eyes already closed and his thoughts drifting back across the years to his brothers, “I’ll see you all again.  Until then, stay safe and meet me in a dream of this hard land.”

Revis and I need your help! Click over to his blog and provide your argument for fiction’s best assassin. Is it the terminator? Is it the winter soldier? Is it a character from a book you are currently writing? Throw their name in the hat and then we’ll let the blogosphere decide on the best!

A while back, I did a post asking for others to help me debate who fiction’s greatest archer was. I asked that anyone who wanted to participate should write a post and link up to my original post. Only two people besides me did it. In retrospect, I realized that what I asked was probably too much work for most people to do. After all, we’re all busy people.

So when Matticus and I started talking about a new Versus matchup, I got the idea to try this idea out again, only this time I won’t be asking you to do an entire post on it.

The topic of this particular Versus episode is: Fiction’s Greatest Assassin.

If you would like to participate, all you need to do is comment your choice and give at least 2 or 3 sentences on why you think your choice is Fiction’s Greatest Assassin… 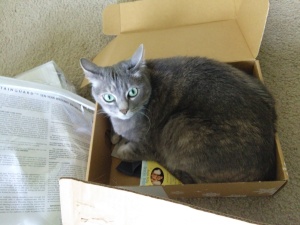 The writer, the scribe, the teller of tales, the spinner of magic, the Belle in a box?  Perhaps.

Last week, in response to a post called Wandering Spirits, an idea occurred to me while responding to the very nice comment left by Aul, aka Dominic.  The basic premise is: can you stump me?

November is nearly upon us, and that means Nano Poblano madness.  I hadn’t thought it possible for me to post every day next month as part of those festivities, but… what if you all sent me prompts?  Maybe then, if I had enough time to write and schedule ahead of time, I could actually participate.

The gauntlet has been thrown:  Is there anything I can’t write about?  Let’s find out.  In the comments leave a topic and a style that you either want me to tackle because you’d like to see what I come up with, or that you think I’ll struggle with and want to laugh at what I come up with.

Examples:  Magic / Poem, Politics / Haiku, Astrophysics / Flash Fiction, and so on and so forth.

Have fun with it.  Leave me a challenge.  Leave me something silly.  Leave me whatever you fancy.  And I’ll turn it into a post, and hopefully we’ll all have a bit of fun.  Sound good?

Greg whispered as he poked his sleeping father in the eye.  Standing on his tiptoes he had just enough stretch in his fingers to reach the edge of his dad’s left eye.  He had wanted to peel back the lid to see if his dad was faking, but he couldn’t manage it.  So, he poked.  Several times.

A giant hand emerged from under the covers to fly-swat Greg’s fingers away.  With a grumble and a series of popping joints, the sleeping giant rolled closer to the eagerly awake child.

“Daddy,” he whispered again, prying open the man’s right eye and peering into its depths, a wild grin dancing in time with his mischievous eyes.  “Come on, it’s starting.  Come and watch with me, please.”

There was urgency in Greg’s tiny voice and that, more than having his eye prodded, roused the father from slumber.  “What is starting?”

“The sky is being reborn!”  The excitement in Greg’s voice carried it from whisper to shout and bounced the words around the four walls of the bedroom.

Unseen, stealth under the covers, Greg’s mom gently shoved her husband towards the edge of the bed, encouraging him to get up and take their child to watch the sunrise and leave her in peace to catch a few more minutes of peace, or face the consequences.

Slippers on, yawning, Greg’s dad shuffled from the room, haltingly being pulled by the exuberant boy.  He longed to stop and fill his hand with a warm mug of coffee, but time would not allow such indulgences.  The porch beckoned.  Morning was coming quickly.

The mumbled words might have seemed unintelligible, but Greg had no problem deciphering their meaning.  He’d had five years to learn the language of sleepy Daddy.  “Oh Dad, stop being silly.”

“No, really,” he rubbed his eyes and closed the screen door behind him as he stepped into full consciousness, “what did you mean by that?”

“Well, every night the sky dies, right?  So, every morning it must be reborn!”  Greg was practically jumping in anticipation of the revival.

His father, on the other hand, scrunched up his face into the same one he made when he claimed his head hurt sometimes on the late afternoons of days that had run too long.  “The dying sky…?”

A moment later as the first hint of orange caressed the horizon and began to push away the dark, life over taking death, understanding dawned.   “Greg, night is just night, the sky doesn’t actually die!”

Greg was too engrossed in the miracle he was witnessing to hear his father’s words.

I’ve been meaning write something happy and silly for a couple days, and this week’s Inspiration Monday prompts provided the perfect opportunity:

FOR THE LAST TIME

A symphony plays across the heavens, at times beautiful, at times tragic.  Tears of sadness and joy fall unchecked to soak into the listening earth.  The audience is so enthralled they don’t mind or even notice.

The notes rise and fall, intertwined, and caressing those lucky enough to witness the masterpiece.  The bass sweeps over the land in waves of pressure.  The treble dances along, playful and haunting.  The clefs work together and against each other producing a cacophony of discordant and harmonious tones.

As the end nears, the music reaches a deafening crescendo, forcing the world to pay attention, humbling those closest to the orchestra.  The fierce instruments roar with life and death.  The drenched land trembles and then throws its arms wide in jubilation as the final note fades to the horizon.

Silence follows, thick and heavy, crushing the world under its weight.

Then lightning flashes trying to forever capture the final moments of the performance and thunder claps with exuberance, demanding an encore that will never come.

Not sure what to say about this one.  I saw the Inspiration Monday prompt and this is what came to me when I placed my fingers on the keyboard.  What are you inspired to write with the below prompts?

THINGS YOU WISH YOU KNEW